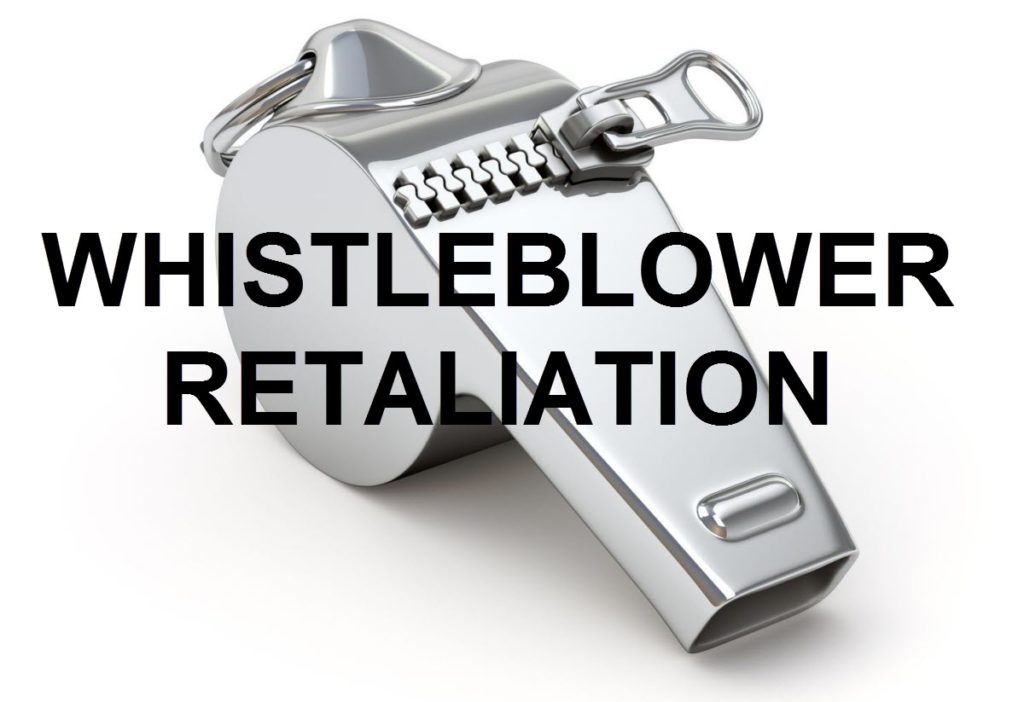 There are both STATE and FEDERAL laws, including the Sarbanes-Oxley Act of 2002, that protect whistleblowers from retaliation by their companies and employers. If you or your company engages in retaliation against a whistleblower that complains of fraud, illegal activities or other wrongful dealings in the workplace, you are risking a lawsuit brought by the worker. In addition, you could face criminal prosecution if the circumstances are correct.

The Sarbanes-Oxley Act of 2002

After some of the most heinous financial frauds and corporate mismanagements ever seen (the Enron fiasco, for example), the United States government passed the Sarbanes-Oxley Act to force companies to act according to the law. The primary thrust of this Act is to prevent shareholder fraud and other financial wrongdoings of publicly traded companies. However, there are clauses within the Act that also create strong protections for whistleblowers.

By the terms of the Sarbanes-Oxley Act, if an employee makes complaints about his or her employer breaking, or not following, certain federal laws relating to securities, shareholder fraud, or other types of fraud (wire, mail, or bank), that employee is protected against retaliation by his or her employer. Even if it turns out that the employee’s complaints do not turn up any fraud or other wrongdoing, the employee is still protected as a whistleblower. As long as the employee had a good faith intention when he or she made the complaints, they are protected from retaliation.
Lastly, it is worth mentioning that the employee does not have to complain to a federal or state agency to receive the protection provided by the Act. Indeed, even if an employee makes a complaint to a superior within the company, he or she is still considered a whistleblower and will receive the protections accordingly.
As an employer, it is imperative that you comply with the Sarbanes-Oxley Act of 2002. Under the law, if you, as the employer, take an act that is intended to retaliate against a whistleblower, you could face fines. In addition, you could face time in prison – as much as 10 years.

Other Federal Laws that Protect Whistleblowers

In addition to the Sarbanes-Oxley Act, there are a number of other federal laws that protect whistleblowers in the workplace. As an example, employees that complain about discrimination or harassment in the workplace are protected against retaliation by their employers. There are other federal laws that also protect employees that complain about violations of health or safety codes, violations of the Family and Medical Leave Act, or about their employers breaking wage and hour laws.

Although many of these laws do not refer to “whistleblowers,” the concepts are the same — namely that you cannot retaliate against employees that make complaints about your company. Employees cannot be fired or subjected to other retaliatory measures because they made complaints, whether inside or outside of the company.
Lastly, there are a number of federal laws that protect workers that complain of wrongdoing within specific industries. For example, there are laws that protect workers that are employed by companies that do work for the federal government, or those that are employed by companies that deal with hazardous materials.

In addition to the examples above, many states also allow employees to bring lawsuits when they believe that they were disciplined or terminated “in violation of public policy.” Generally speaking, many of these claims are brought by former employees that believe they were fired for reasons such as exercising a legal right or complaining of their company’s illegal activities. You should look up your state’s laws on this matter as they vary widely from one state to another.

There are some states that only allow an employee to bring a “violation of public policy” lawsuit if they complained to a government agent or agency. Other states allow employees to bring such lawsuits for internal complaints. Some states allow employees to bring lawsuits only when the law that the company allegedly violated contains explicit anti-retaliation clauses, and others do not have such a requirement. Still other states do not allow “public policy” claims at all.

How to Avoid Whistleblower Claims;